The ASI5810/ASI5811 are professional PCI Express audio adapters designed for use in radio broadcast production. The adapters offer two stereo record streams from either a balanced analog input or AES/EBU digital input and four stereo play streams mixed to both a balanced analog output and an AES/EBU digital output.
The ASI5811 also includes is a microphone input, with low noise pre-amp and a 48V phantom supply. Both versions also include GPIO in the form of four opto-isolated inputs and two relay isolated outputs.
FEATURES 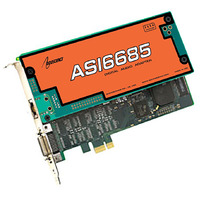