CABLES ARE SOLD SEPARATELY WITH ALL ASI6XXX ADAPTERS

The ASI6585 and ASI6685 are professional PCI and PCIe sound cards designed for use in Axia Livewire™ IP-audio based radio broadcast automation systems  They use the Axia Livewire protocol to record and play audio streams over a standard Ethernet network.

Providing up to 16 play streams that are mixed to 8 stereo outputs and up to 16 record streams fed from 8 stereo inputs, the ASI6585/ASI6685 features AudioScience’s unique “anything to anywhere” mixing and routing.

A choice of uncompressed PCM, MPEG layer 2, and MP3 is available for both recording and playback. All compression is handled by an on-board floating point DSP, allowing the host computer to focus on other tasks.

DSP based functionality includes MRX™ multi-rate mixing technology that allows streams of different sample-rates and formats to be mixed digitally. TSX™ time scaling allows compression/expansion of any or all playback streams in real time with no change in pitch.

For emerging surround sound applications, SSX™ mode allows multichannel streams of up to 8 channels to be played, recorded and mixed. 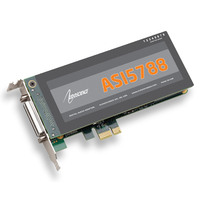