The ASI8921/ASI8821 series are professional PCI tuner adapters designed for use in AM/FM/RBDS/RDS radio broadcast audio monitoring and auditing.

The ASI8921 and ASI8821 are based on tuner modules. Each module has four tuners on it and the ASI8921/ASI8821 can hold a maximum of two modules. The ASI8921 is a PCI adapter and the ASI8821 is a PCI Express (PCIe) adapter.
Up to eight different channels of AM or FM can be received and recorded simultaneously from a single antenna input. Recording formats include PCM and MPEG-1 layer2 and MPEG-1 Layer 3 (MP3).
FEATURES 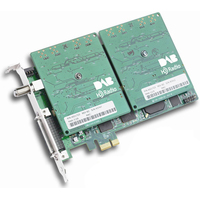